Bitten by the Out of Bounds Bug 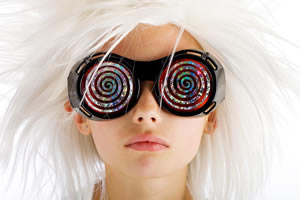 I started doing research on Venus out of bounds after editing Steven Forrest’s video workshop on the Out of Bounds Moon. I’ve been wanting to study the subject for a while and finally had the opportunity while writing his recent newsletter. I was thrilled to find that, in my sampling of 130 charts of famous people, many patterns started to emerge that gelled with the commonly held ideas about how out of bounds planets express.

A quick search on “Venus out of bounds” returns several brief blog entries that describe the general hypothesis that out of bounds planets are wacky, forward-thinking, or outside the box. Some describe this as a difficult placement and use terms that are limiting or judgmental, which is common in generalized descriptive astrology for better or worse. I wouldn’t say that at all. Difficult placements can bear beautiful fruit. And “easy” placements can fall short of awesome.

There hasn’t been a ton of published work about planets at extreme declinations. Kt Boehrer’s is credited as coining the term “out of bounds,” and though I’m hoping to track down a copy of it at this year’s NORWAC, I haven’t read it yet. Also on my declination reading list is Paul Newman’s Declination in Astrology, which looks promising. The AFA has a book by Joseph Silveira deMello called Declinations, and outside that, there isn’t much out there (get it: “out there”…chuckle chuckle).

In any case, I haven’t found any detailed study on the topic, so I’m diving in myself.

I’m having more fun exploring out of bounds charts than I have with anything I’ve studied astrologically so far. The pattern jumps out, and it’s teaching me more about the planets themselves. If the out of bounds signature enhances the planet, it should stand out, all other aspects and important rulerships equal…and so far it hasn’t let me down.

I won’t give too much away just yet, mainly because I’m still piecing it together myself. But as I’ve explored out of bounds charts, patterns have been emerging that are specific to the planet in question. I describe some of those for Venus out of bounds in Steven’s recent newsletter, which you can read here. It’s been revealing sorting people into categories. But the detailed personal bios are also really rich.

We can find several folks with Venus out of bounds who we might describe as artists and musicians who push boundaries, explore difficult subject matter or break into new territory. Björk is my current poster-child for this category. An Icelandic singer who broke into the mainstream, we’re already in out of bounds territory when we talk about Björk just because of her cultural heritage. It’s definitely not every day that an Icelander gets our attention. And Björk stands out for much more than her ridiculously cute accent.

Although her first major-label release, appropriately titled Debut, is accessible and upbeat, she’s since delved into more groundbreaking and experimental territory with every release. On releases like Vespertine and Medúlla she cemented her reputation as an artist and musical trailblazer, with vocally-driven creations that are unparalleled, if at times hard to listen to.

We don’t have to look hard to find the table-turning version of the Venusian signature in her art, which is erupting with innovative beauty and grace, and also referenced literally, with song titles like “Venus as a Boy” and “Big Time Sensuality.” She won our hearts with her flirtatious and zany antics in the video for “It’s Oh So Quiet.” And she wowed us with the sensual (in the highest sense of the word) and artistic genius of her “Hidden Place” (can you say triple Scorpio?) video. She turned heads and evoked some very rude criticism for wearing a swan dress to the Academy Awards. And although the dress shows up on most “worst Oscar dresses ever” lists, I’d personally describe the dress in more celebratory out of bounds terms like bold genius, innovative, and forward-thinking.

And that’s just a start! We haven’t even mentioned her heartbreaking and other-worldly performance of Selma in Dancer in the Dark, for which she won the best actress award at the Cannes Film Festival (and was of course looked over by the Academy, although she did get nominated for Best Original Song). I could go on and on… but this is a blog post. And thus, just a tease! (Venus told me to say that.)

Can’t wait to share more with you so stay tuned for more from the Out of Bounds vaults.