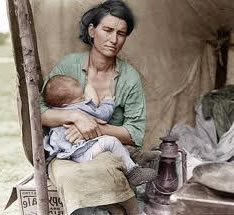 On Friday December 28th, the full moon, at home in Cancer, the sign of the Great Mother, is matched in expression by its opposition from the Sun in Capricorn conjunct Pluto. Here we have the archetypal mother-nurturer, opposite the solar-expressive father. On this day, our need to find sustenance, warmth, and emotional comfort stands in sharp contrast to our solar principle – the ego’s desire to express, to do, and to accomplish; the powerful drive to be, to exist; the capital-letter expression of I AM. In Cancer the moon wants to support, to heal, to nurture. In Capricorn, the Sun wants to build something concrete, and importantly, to leave behind a legacy. The opposition suggests some tension between these forces. Maybe this nurturing element comes at an unwanted time. Or our drive to accomplish perhaps steamrolls our need for rest, comfort and support.

While browsing the web for some Great Mother imagery, I was reminded of this painting of mother and child set in the Great Depression. This imagery sheds light on another angle of the archetypal polarity between Cancer and Capricorn – here, the nurturing mother seen in her stark strength and vulnerability, at odds with the unrelenting demands of culture, of ego. The mother here is seen struggling to nurture in the absence of adequate resources, thwarted at every turn, by society, and the world of “men.” In this month’s full moon, the conjunction from Pluto to the Sun adds to our picture that perhaps the Great Mother is facing an adversary who is too strong to “kill with kindness.”

But every chart has more than one note, and in the chart for this month’s full moon, the moon’s trine with Saturn in Scorpio does bring to mind a positive mother-father partnership. The image I see is the kind of supportive parental unit that provides fertile ground for a soul who is meant to accomplish something big in the world (positive expression of Sun+Pluto in Capricorn). This Saturn in Scorpio image is that of a father with depth, and fierce honesty, and the Cancer-Moon mother has rich heart, and plentiful big hugs.  But if we think of the Sun+Pluto as the child in this imaginary dynamic, with the sun representing the ego shaped by the mother-father team, then there is tension here with the mother.  The image is one of mother who is somehow at odds with our sense of purpose.

Separating from a square to Uranus, the moon’s movement suggests a breaking away from recent trauma and shock, and a step towards healing. The sweet soul inside us seeks warmth, touch, a glowing hearth; some real human connection to bring us in from the cold, distant detachment of our collective PTSD, evident from recent collective events.

Jupiter stands at the apex of a dramatic yod pattern that includes Saturn and Pluto+Sun in sextile. If we use the modern rulerships (which I think of more as affinity that actual rulerships), Saturn and Pluto are in mutual reception, further enhancing the chummy stimulation the two planets are sharing. And that excited energy vectors upwards, seeking an outlet in poor, confused, retrograde Jupiter in Gemini, who is too scattered in a frantic search for its next big picture view of things. Unfortunately the timing is a little off, and it’s still not quite sure what that is… More information is needed. The shifting sands of our percolating vision are too hard to pin down at the moment. So our focus should be on what IS working… which suggested by the dynamic ego-driven sextile between Saturn and the Sun+Pluto. Ego is king in this configuration, with a focus on the material world and tangible achievements.

Ego gets a bad rap, especially in spiritual and psychological circles. But without it, we’d be mush. Most things we think of as great human accomplishments have been backed by a force of ego that is easy to recognize. Can you think of Albert Einstein without picturing that personality-filled image of him with his crazy hair and wacky half-smile? This is a time to celebrate the ego, to be in touch with the light inside, the driving force, the compulsion to make one’s mark, to exist, to take up space in the world. The forces at hand are strong for tapping into both one’s conscious ego drives, and also the unconscious ones.

This yod suggests that there is work to do refining our big-picture vision, so it follows that being a little more myopic than usual will somehow serve us right now. Shift the focus to you today. What really gets you going? What legacy would you want to leave behind, if you could?

Although this Sun+Pluto in Capricorn has a drastically more serious tone, we can learn something about this expression from another Sun+Pluto person – Mick Jagger. With his overblown Sun+Jupiter+Pluto+Mercury stellium in Leo, Jagger is hard not to notice.  In the Rolling Stones hit “She’s So Cold,” Jagger sings, “I’m the burning bush, I’m the burning fire, I’m the bleeding volcano,” expressing the titanic Dionysian quality of compulsive Plutonian energy.

What is on fire in you now? What is igniting inside you? It’s time to pay it some attention, and maybe even to nurture it into form…