Star Trek Into Darkness and the Uranus Pluto Square 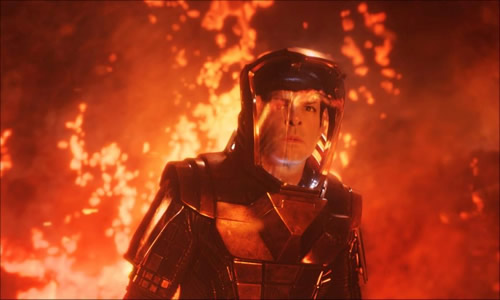 Analyzing astrological archetypes can get so complex that it’s always fun to see them expressed literally. In Star Trek Into Darkness, the newest installment of the sci-fi franchise, we get hit over the head with the Uranus-Pluto square symbolism in the first few scenes. In astro-speak, right now we’re in the middle of a long cycle in which Uranus is in the sign of Aries, and Pluto is in Capricorn, and they are in a tense relationship with each other called a square. At the opening of the film, we get to see Spock standing in the middle of a sea of red, in the heart of an active volcano that’s minutes away from erupting. His task is to plunge some technological wizardry into the core of the volcano that will turn the lava solid thus preventing its eruption. His goal is to protect a race of indigenous people who are at a fragile beginning stage of their evolution.

With his sharply angular haircut and high-tech finery, Spock is one of our classic Uranian cultural icons – the genius outsider, whose ability to detach from his emotions is his most prominent asset.  The image of him standing in the middle of the volcano vividly embodies the archetypal field of Uranus in Aries – with Spock evoking Uranus and the hot lava and danger of the situation evoking Aries. In its high expression, the Aries endgame is to develop courage. So we can find strong Aries signatures in the presence of heroic deeds.

Pluto also stands out in this image, as the elemental power of the volcano. And the entire situation evokes the transit of Uranus square Pluto, with the vulnerable life forms threatened by environmental chaos, and the struggle to save them.

The film tackles several other Uranus-Pluto themes, including corrupt and powerful organizations, and renegades who buck the system while struggling to save humanity from some dark evil. The struggle and conflict – that’s the feeling of the square. During a square, we can’t predict who will win, but we can plan on the conflict.

The Enterprise plunges at warp speed into a Plutonian realm – the darkness alluded to in the film’s title –  a forbidden zone that we’re meant to be scared of. A place we wouldn’t want to go without some extremely good reason. As always, art imitates life, and as a metaphor, the Enterprise’s courageous journey into darkness reminds us that we’ll have to undertake something similar in our own lives if we’re to personally navigate this transit well.

The film could do a better job handling sexist objectification and it relies a little too much on action at the expense of psychological depth. But it does make an important and timely point in its conclusion. In his closing words, Kirk reminds us that we need to diligently address corruption at all levels of our power structures, no matter how high up the chain of command. We’re encouraged to keep up the good fight in pursuit of our higher goals without giving up. The film ends at just the moment where the original series begins, as we’re reminded of the original Enterprise’s mission. In a wonderful expression of the high-end potential of Uranus in Aries, Kirk famously restates the mission of his crew: “To explore strange new worlds, to seek out new life and new civilizations, to boldly go where no one has gone before.”

All of this begs the question: where are YOU going boldly? If you’re not quite sure, it might be time to defeat your own inner tyrant and put your metaphorical Enterprise Into warp speed and head off in an entirely new direction, even if that takes you right into the heart of darkness.